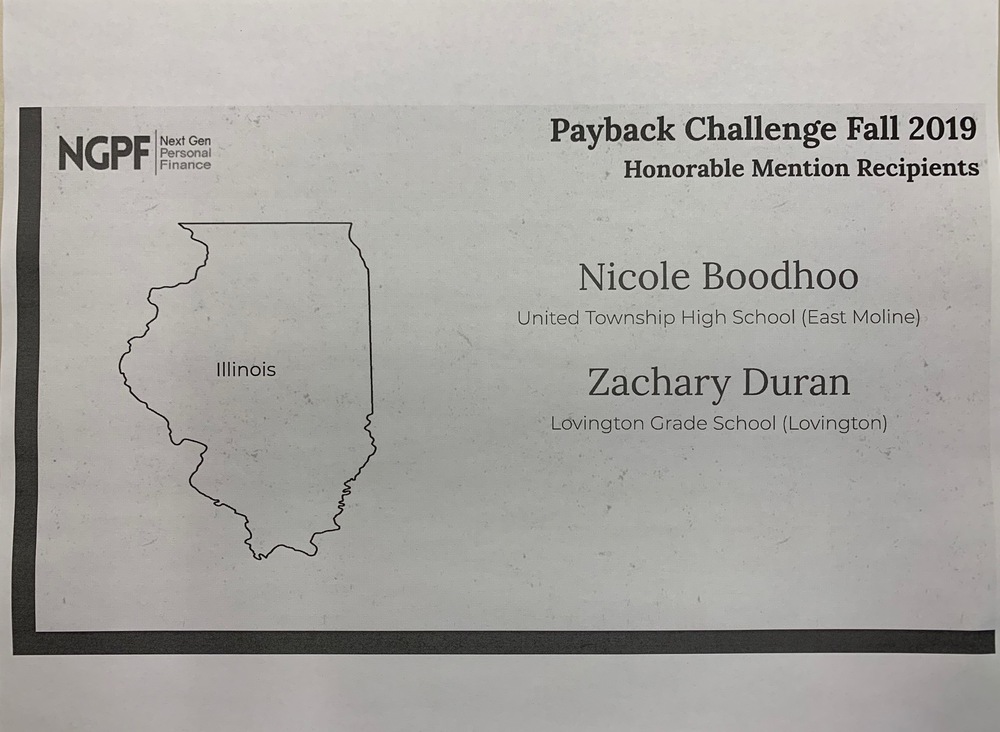 Congratulations to Zachary Duran on his Honorable Mention in the Payback Challenge. Zachary participated in the contest as part of his Financial Literacy Class with Mrs. Lucas.

Read more about the contest and winners below.

PALO ALTO, California, January 14, 2020 - Next Gen Personal Finance (NGPF), a non-profit committed to ensuring that ALL students leave high school with the skills needed to thrive in an increasingly complex financial world, is pleased to announce 94 students from across the nation have received an Honorable Mention Award in their third annual PAYBACK Challenge.

Over 900 students from all across the United States submitted essays earlier last fall. After playing the award-winning college finance game, PAYBACK, students wrote a 250-word essay answering one of these questions:

Write a letter to your future self that you will open after your freshman year of college, reminding you of the key skills you will need to thrive during your college years.

How could you use the online game, PAYBACK, to have a conversation with your parent/guardian about paying for college?

Teachers nominated the best student essay from their classes. The essays were judged based on the following criteria:

Here’s the complete list of winners by state. Each of the Honorable Mention winners will receive a $500 award from NGPF to be used for educational purposes. “Over 200,000 students played PAYBACK during the contest period,” noted NGPF Co-Founder, Tim Ranzetta. “It was great to see the impact this game had on students’ attitudes and actions as they decide on their educational path after high school. Thanks to the educators who engaged with their students by bringing PAYBACK to their classrooms and facilitating the amazing conversations that followed. With student debt at record levels, these conversations are more critical than ever.

Here’s how a few students explained what they learned after playing PAYBACK: "Staying in control of your debt won’t come easy, but thanks to PAYBACK, you have already been given some ideas to help alleviate your constant stress over this topic.” "The PAYBACK Game opened my eyes to things I never considered. I only considered tuition, not other costs like food, appliances, or even emergencies. I didn’t take into account all the challenges outside of school, like balancing work, friends, and family…. PAYBACK gave me a ton of questions to consider and a starting point for conversations with my family about college expenses.”

“Anything I can do to prepare myself for the massive debt I will incur in college. Nothing sounds more disheartening than spending years pulling myself out of a vortex of quicksand, where no matter how much I pay off, more and more debt still pulls me back under.” PAYBACK received a Webby Award for best Social Impact game  and best Educational Game and was featured in the New York Times. It is a free game available in the NGPF Arcade.  About Next Gen Personal Finance: Next Gen Personal Finance (NGPF), has become the "one-stop shop" for more than 25,000 financial educators looking for high-quality, engaging curriculum to equip students with the financial skills they need to thrive in their future. NGPF now reaches over sixty five percent (65%) of U.S. high school students who attend a school where a teacher is using their curriculum. NGPF has been recognized by Common Sense Education as a “Top Website for Teachers to Find Lesson Plans.”

PAYBACK Fast Facts: Created by McKinney, digital agency based in Durham, North Carolina, in collaboration with Next Gen Personal Finance